Brunch has launched at Gaucho, Birmingham and if you are looking to treat friends or celebrate then this is for you!

Electro Brunch is a two-hour bottomless brunch, featuring an endless parade of food and drink. One rule.. you can only have one dish and one drink at a time. soo no stacking them up. Yes you..

Here’s what happened when I visited Gaucho earlier this month:

Gaucho, at 55 Colmore Row, Birmingham is built into the hillside. On entering, the plush décor at ground level transports you into an intimate and secluded setting, in one corner is a glass walled private dining room, containing lined walls of wine bottles.

Jo-ann and I arrived at 12.30pm, we were greeted by the happy, friendly hard-working team. I worked in the retail sector in Birmingham for many  years, and I know that at least 20 people apply for every job in central Birmingham, so if you have to prove you are the best for your role, you are going to have demonstrated great skills. This team have worked very hard to present their skills in everything they do.

We were seated immediately, and Jo-ann looked around the plush greys, blacks and lots of bespoke lights.

Seeing what you can eat in two hours is almost a challenge, and its all about attempting it at a steady rate. We started with Medialuna: Peanut butter dulce de leche which is a sweet cream to accompany our croissants. We could have eaten pots of the peanut butter and we had a Domaine Chandon (Sparkling Argentine wine ) to start our lunch time drinking.

Then Jo-ann tried Oven-baked Chorizo Sausage which was presented in a small pan with an egg and a plum tomato whilst I had the Choripan Sandwich. 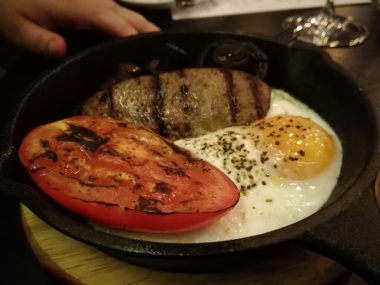 Now dear reader, I’ve never tried a Bloody Mary, but for you, I knew it was my duty to order and photograph one, So I ordered a Gaucho Bloody Mary which contained, vodka, tomato juice, chimichurri, citrus, Tabasco.

Next Jo-ann tucked into Beans on toast with Spanish Chorizo while I went for the lovely Smashed Avacado on Toast with crispy bacon bits.

Beans on toast with Spanish Chorizo

Jo-ann was taking a pacing approach to drinks alternating between alcohol drinks and soft drinks, so next had an Apple Gone Loupe which is apple, melon and mint. While I tried Rubia Pilsner Lager which is the most conventional menu item. 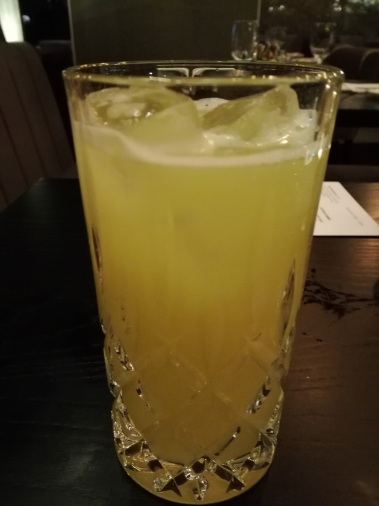 More food and Jo-ann tried Steak and Eggs (Churrasco de cuadril and fried egg! is what the menu says) and I had the Gaucho Benedict with Salt beef. I have to say  I was very impressed by this as its not something I’d normally try.

Then it was time for Banana Pancakes which come with maple syrup or NUTELLA!

I needed a rather long nap after eating and drinking all this but felt very full and very happy! Electro Brunch at Gaucho Birmingham is well worth treating someone to and the Electro comes from the DJ based in this lovely restaurant, the music is unobtrusive but nice if you are just wanting to relax.

Check out Electro Brunch on Saturdays at Gaucho between 10am and 4pm (with a two hour limit) Booking ahead here: gauchorestaurants.com/events/event/electro-brunch/.

#BrumHour was invited with a plus one to Electro Brunch by Gaucho and not pay for food or drink, we did leave a tip. I was expected to write an honestly held experience in return. This isn’t a sponsored post.