La Cage Aux Folles is at Birmingham Hippodrome until Saturday 20th May and it is a treat to behold.

The story is based on Albin (Zaza) and Georges, a married gay couple who run Saint-Tropez premiere drag nightclub called La Cage Aux Folles. Georges fathered a son, the result of a previous brief fling with a woman and he and Albin have bought the boy up together. The son, Jean-Michele is now a 24 year old young man announcing his engagement to Anne, who in turn is the daughter of a politician. Unfortunately Anne’s father is very conservative, anti gay and trying to close down La Cage Aux Folles as he wants to implement strict new morality laws. And Anne’s parents are about to visit! From then on chaos begins.

As well as being visually spectacular, with a fabulous set of show tunes, La Cage is also a love story, a comedy, sprinkled with some farce and lots of glitter. Nights out really don’t get any better than seeing this wonderful show live on stage. John Partridge singing as his alto ego Zaza gets a standing ovation at the end of act one after his perfect yet heart moving rendition of I am what I am.

John Partridge is very well known for his skills on stage, he is a fabulously talented singer, classically trained dancer and ridiculously handsome when he plays a man but also makes for a stunning looking woman when he puts on a sequinned dress, I loved the chemistry Albin and Georges Adrian Zmed had together on stage and when Georges sings Song on the Sand to Albin it is with genuine tenderness and their love for each other is touching. 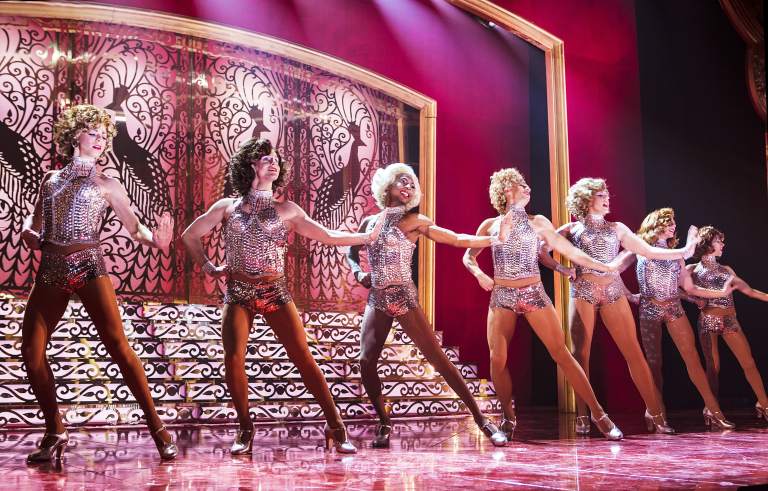 The show starts with les Cagelles singing We Are What We Are, a group version of I Am What I Am, and it is spectacular. The costumes are truly breathtaking in this. With more feathers, spangles and glitter than you could begin to imagine. With dance sequences which are very much in the old school cabaret show style, you will be treated to all the glitz and glamour anyone could possibly need in one night.

Zaza has a little audience interaction at one point and it is very funny, I’m not sure that most of it was scripted. There is a lot of gentle comedy in this show, and I found Georges and Albin’s maid Jacob, Samson Ajewole very funny, I defy you not to smile when you see a 6 foot tall man wiggle across the stage wearing a traditional french maids outfit, he certainly had his flouncing down to a tee when M. Dindon, Paul F Monaghan and Mde. Dindon Su Douglas were receiving his wrath. Marti Webb is restaurant owner and friend of Georges and Albin, Jacqueline and fundamental in persuading the Dindons to be a little more accepting of differences in people and she does sing The Best Of Times with Albin and the company, I did tell you it was a night full of treats didn’t I?

Thank you to the Birmingham Hippodrome for some wonderful hospitality and for giving me the chance to see what is now a modern classic, I had the very best of times.

La Cage Aux Folles is at Birmingham Hippodrome until Saturday 20th May are available here: birminghamhippodrome.com/calendar/la-cage-aux-folles/

Julie and I went to see La Cage Aux Folles at the invitation of Birmingham Hippodrome and it was FABULOUS DARLING! Mwah Mwah xx