I’ll be writing a blog post in the next two weeks about Everyman Barbers in central Birmingham but first here’s what they sent me to share.

via Stephen for Everyman Barbers twitter.com/EverymanBarbers

After 10 successful years in Birmingham city centre Everyman Barbers have gone all-out to mark their anniversary with a £150,000 refurbishment and a new mobile app, launched with a handsome serving of whisky and live jazz.

The long-standing barbershop at 19 Temple Street, Birmingham has been serving the local business and student communities with haircuts and shaves for more than a decade, building a reputation as one of Birmingham’s best barbers. 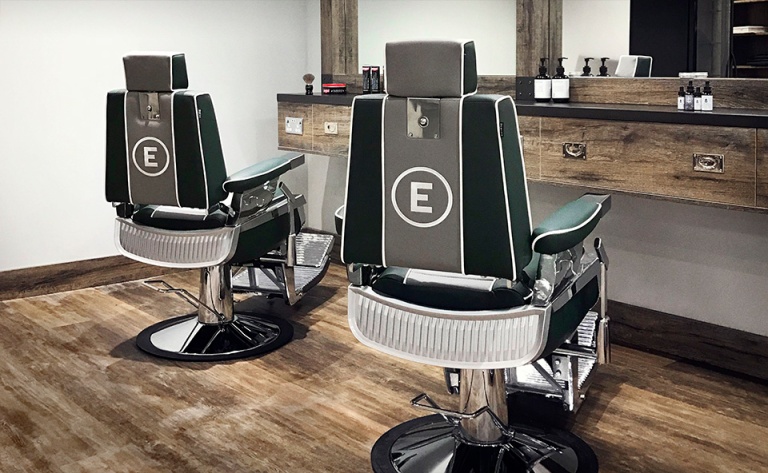 “We love being in Birmingham as it’s where we started out,” says Noel Gilronan, managing director. “We’ve invested a small fortune in the new look and we wanted our launch event to match how cool it now looks inside…it’s even better than we expected.”

Thick wooden mirrors offset new racing green two-tone leather barbers’ chairs that have been stylishly emblazoned with the trademark E logo. Additionally, USB sockets have been installed on all barbers’ sections so customers can charge up while they enjoy a free beer with their haircut.

The new Everyman Barbers mobile app — available on iOS itunes.apple.com/us/app/everyman-barbers/id1133630934?mt=8 and Android here: play.google.com/store/apps/details?id=uk.ukbusinessapps.everyman&hl  rewards customers with 50% off when for every 6 digital stamps they collect, while the popular Everycam, which allows customers to check how busy a store is or to see if their favourite barber is working, is also available on the app.

“It’s 2017 and people rarely leave their phones behind, so they won’t miss out on their reward for loyalty…we have to stay with the times,” Gilronan says, adding that modernising was a “key feature” of the 10th anniversary, as they prepare to open two further Midlands stores next month in Derby (9 March) and Leicester (30 March).

They currently have operational stores in Birmingham, Bristol and Nottingham. With Derby and Leicester opening in March it will total five stores.

This is not a sponsored post but I am having a beard trim (I hope!) and maybe a beer!