Sunny afternoon. Or Ray, you really got me.

First things first, this morning I awoke hoarse!  Waking hoarse after a night at the theatre means only one of two things. A. I have a cold or B. I cheered and wooped and sung lots lasts night. I do not have a cold.

The New Alexandra Theatre in Birmingham, is showing Sunny Afternoon this week, the musical based on the story of the 60s band The Kinks and featuring more tunes than I could have  thought possible.

It’s gritty, it’s very funny and it’s loud! But it was also very educational,  so many songs I didn’t know had been written by Ray Davies, Stop your Sobbing and I Go to Sleep both made famous by The Pretenders, Days by Kirsty MacColl,  Village Green Preservation Society and  many more, although not every song I mention here is included in this massive  musical I certainly felt that a whole lot of music by Ray Davies had been shoehorned in. The man and the musical both give great value for money. 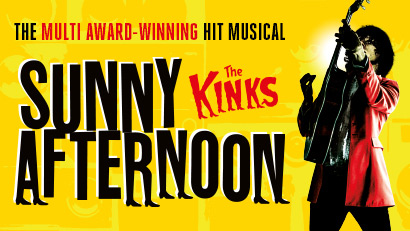 The opening set was simply wall to wall, floor to ceiling speakers, the kind you have attached to an old school sound system with woofers  and it was visually both understated and dramatic. It set the tone, you knew you was watching a musical about music.

The actors are once again superbly cast with Ryan O’Donnell as Ray Davies and  Mark Newnham as quirkier Dave “The Rave” Davies these two really have got everything. They had genuine presence whilst on stage, fabulous singing voices, the accent was authentic London East End and never once drifted to Mockney  or Estuary and they looked like the knew their way around the guitars, Andrew Galloway playing drummer Mick Avory gave a fabulous drum solo.

I loved the cast, they really did transport me to the swinging 60s, the only shame was the girls did seem a tad under used. Deryn Edwards playing Mrs. Davies has a great voice and an impressive résumé  as does Lisa Wright playing Rays wife Rasa, but the play is about The Kinks  and their music so that unfortunately  limits the  options for the girl’s.

This musical is not subtle, a riff starts and it’s loud and instantly recognisable, we were teased, all I wanted was to hear the tune but Ray would strum dum, dum dum………dum dum dum , and walk away saying “got nothing yet”  someone famously said “you’ve never had it so good” I think that fits right for the youth and the music of the 60s, it truly was groundbreaking times.

Once again The New Alexandra has another wonderful show with a superb all singing and dancing musical masterpiece.

The finale was much more like a live performance  of a 60s band than the finale of a musical play. Loud enough to blow the cobwebs away, the entire auditorium  on their feet singing,  from the frenzy of All Day and All of the Night, or the ever so gentle I Go to Sleep, to my favourite  Lola there is a whole lot of 60s music for you if you see this show.

Until last night I did not think I knew many songs by The Kinks, oh how wrong I was, not only did I know the majority but they were songs I loved too. So if you are a fan of The Kinks you will love this, if you’re a fan of the 1960s you should love this and if you just enjoy great musical theatre then I recommend  this. It’s clear why Ray Davies won an Olivier Award for outstanding achievement  in music for this splendid show.

Julie saw Sunny Afternoon for #BrumHour and did not pay for her ticket. She will need to pay for throat sweets.