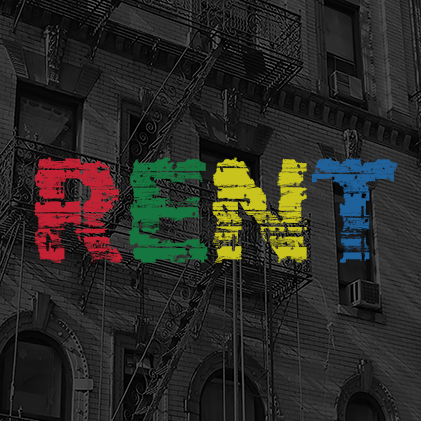 This years Rent! The Musical

Rent is quite a complex musical really, most of the story is told either through lyrics or actions on the stage and their are reasonably long periods without any dialogue.

I have been looking forward to seeing this production at The Old Rep, in Birmingham for months and months, since I first spotted it on the programme. I was not disappointed.

Rent was first performed on Broadway 20 years, ago and it is a tale of artists struggling to make ends meet in New York’s Alphabet City in the East Village.

For me rent is a collection of love stories that are criss crossed around each other, it deals with HIV and AIDS plus the conditions that people accepted at that time.

Joe Ashman plays Mark, and Timothy Gough plays Roger his best friend, they owe lots of rent to their landlord. Roger’s 19 year old girlfriend is Mimi played by Jessica Stringer. Each get their chance to shine in the spotlight with great songs.

While rent is about the three leads, its really an ensemble piece with great vocals by Rhys Owen as Collins, Tom Tilly as his transgendered girl friend Angel,  Sophie Poulton plays Mark’s ex Joanne and Ashleigh Aston is Maureen. Landlord Benny played by James Edge. Its great seeing a cast who clearly have had fun getting to know these characters and allowing themselves a chance to take ownership of them.

The set itself is a suitably 90s rock stage with lots of levels to demonstrate the high rise buildings.

The only issue I had was the volume of the music which at my old age is my ability to pick out the vocals. But I’m sure this is improved on future performances.

Rent at the Old Rep is a great night out! So take the chance to see it if you can!

You can see Rent the Musical at the Old Rep until Saturday 30th July.

The Old Rep were kind enough to invite me to see Rent for free. I say invite. I would have camped outside the Old Rep for a few weeks to get a ticket anyway! Thanks for inviting me!