Yesterday, I was invited to a “topping out” ceremony at Europe’s First Park Regis Hotel, at the end of Broad Street, Birmingham. It’s on the corner of Five Ways Island, by an area that I used to associate with offices, and the old Birmingham Children’s Hospital.

Bakers nightclub and Xl’s Nightclub, used to be on the ground floor of this block, I’m sure. It’s about to finish transforming into a big hotel.

We arrived at the marketing suite to collect hard hats and florescent jackets, before heading to an executive lounge on the 11th floor. Climbing further to the 14th floor we took a look at a large double room, facing down Broad Street into Birmingham. I can’t wait to see the view on a summers day/evening! 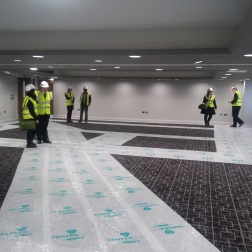 Inside a conference suite

Inside what will become Rofuto

We headed up to the 15th floor which is their conference andprivate hire spaces. There are several rooms to hire here, that can be used for daytime bookings or evening events. There’s a staircase in the middle of the floor here leading up to the top level.

We were led to the 16th floor which mostly glass walls, the three walls of the bar on this floor offer great views away from the city. It will be a Sake bar which I’m excited to visit in the future. Rofuto restaurant will be a Asian fusion place to dine next door, and this long room has glass walls on both sides, offering views of the city centre and I’m sure some days, the Clent Hills will be visible on the other side.

We had a short speech from the Lord Mayor of Birmingham, Councillor Ray Hassall, and its great to feel the buzz about this new Hotel arriving in Birmingham. 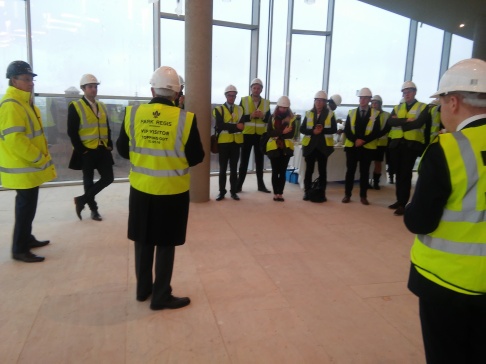 Park Regis Birmingham opens late March and there are some pre-opening room deals on the website parkregisbirmingham.co.uk.

Here’s what the press release said:

via Matt for Park Regis Birmingham

International hotel brand Park Regis will soon call Europe home with the opening of its Birmingham property in March 2016.

The hotel will be located in the former Auchinleck House building on Broad Street, which received a £50 million renovation to transform it into a modern silver‐clad hotel offering 253 deluxe rooms, two junior suites and the largest presidential suite in Birmingham.

Positioned as a hotel for both leisure and business travellers, Park Regis Birmingham will house an à la carte restaurant, all‐glass Saki Bar and Pan Asian Fusion Restaurant on the 16 an executive level complete with conference and meeting spaces, a business lounge with executive check‐in facilities, spa and gym.

The upscale property is the seventeenth Park Regis globally and places Park Regis Birmingham alongside locations including Sydney, Singapore and Dubai.

StayWell Hospitality Group CEO Mr. Simon Wan said that adding a European hotel is a strategic move for the Park Regis brand which has an international portfolio spanning Australia, Singapore,Indonesia, India and the United Arab Emirates.

“The Park Regis brand is rapidly expanding internationally, the opening of our first European‐based hotel in Birmingham aligns with our strategy of opening high‐quality properties in cities which present optimum growth opportunities.

“While the number of hotel beds in Birmingham has increased rapidly in recent years, the number of upscale hotels hasn’t kept the same pace. Once opened, Park Regis will fill this gap in Birmingham’s high‐end hotel offering,” said Mr Wan.

Birmingham is a flourishing city following recent investment in transport links and infrastructure and visitor numbers are at an all time high which creates a prime opportunity for a new upscale hotel.

“A record 37.2 million people visited the city in 2014, providing a near £6 billion economic boost. 2015 has seen an unprecedented scale of investment coming to fruition and 2016 will deliver many high‐profile events including the International Dance Festival Birmingham and Conservative Party Conference. With all this in mind it’s clear that the new Park Regis will be an important addition to the region’s accommodation sector,” Ms Gray said.

For more information about Park Regis Birmingham, or to book, visit parkregisbirmingham.co.uk