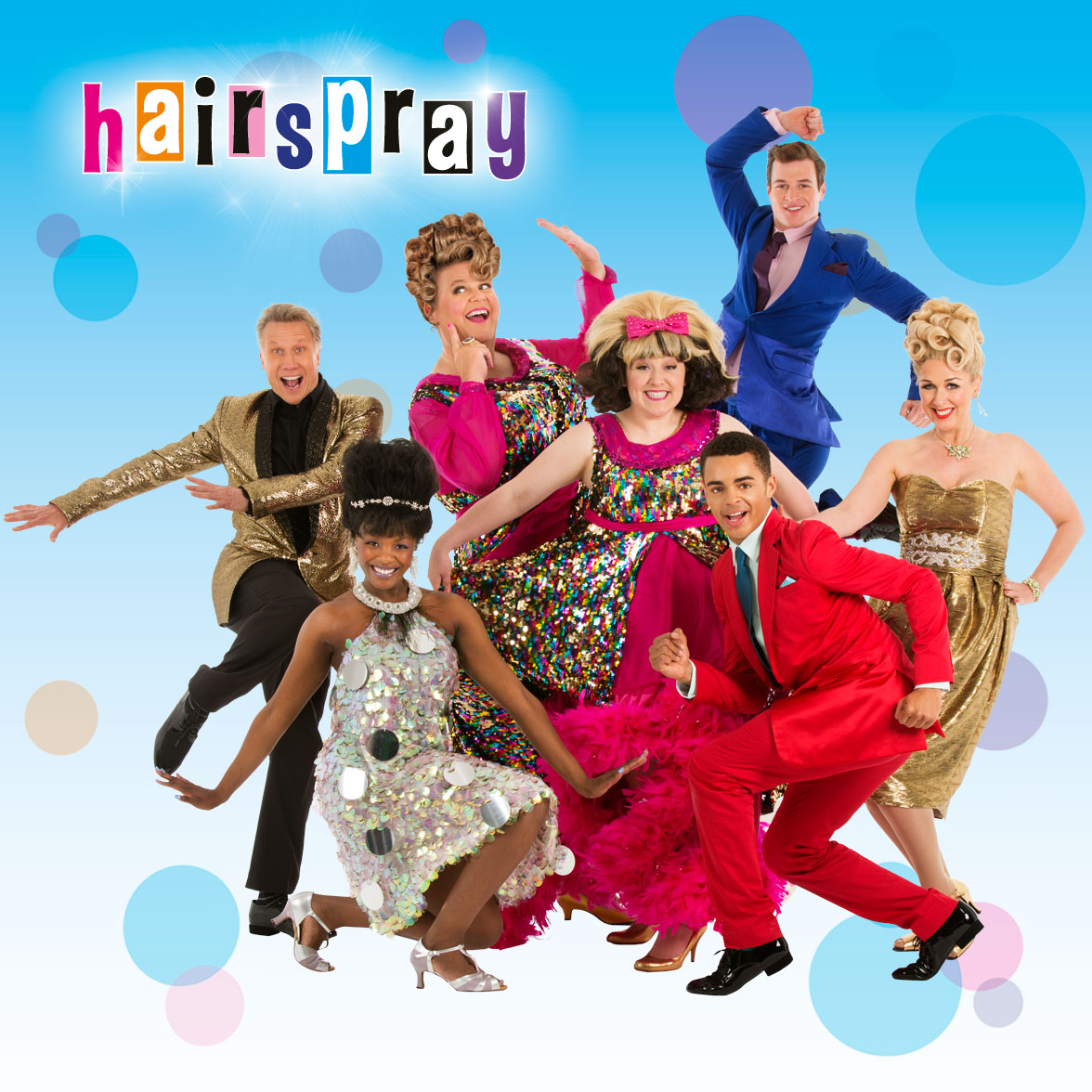 Hairspray at the New Alexandra Theatre

Having never seen Hairspray, I knew very little of what to expect and was amused to discover that everyone I was sat with knew EVERYTHING about it. I knew that a man in drag plays the mother of a much-teased teenage girl who dreams of being famous, but that’s all I knew.

This is a national tour of Hairspray at the New Alexandra Theatre in Birmingham until January 2nd and it features a pretty big main cast. 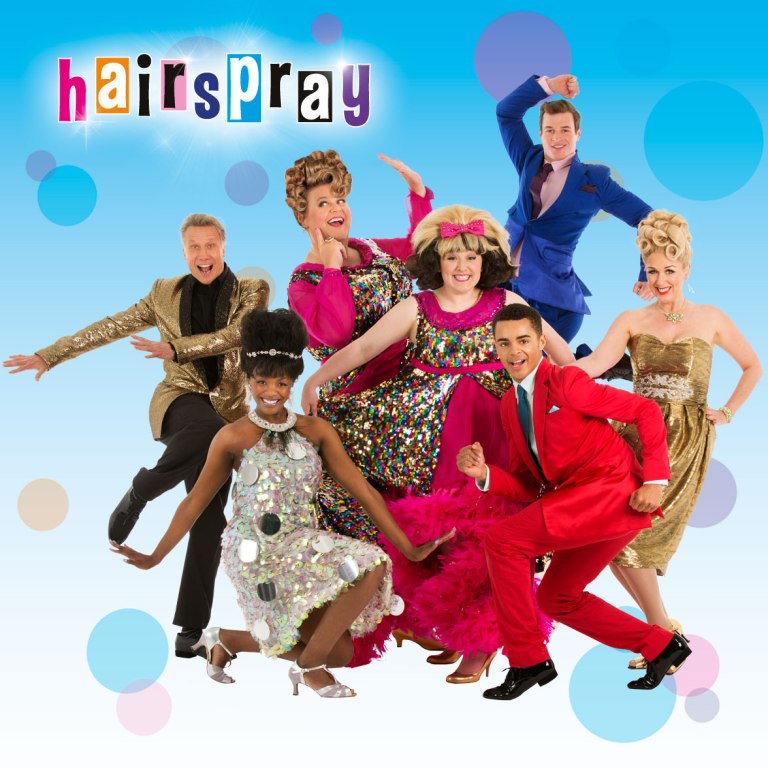 This isn’t a story about big hair, but about how American segregation was still alive in the state of Maryland in the early sixties. The first clue I had that this was going to be a theme. was the black dancers on one side of the stage and white dancers on the other. It challenged me quickly as I’d noticed it but didn’t know why it was happening.

Here’s more about the cast: 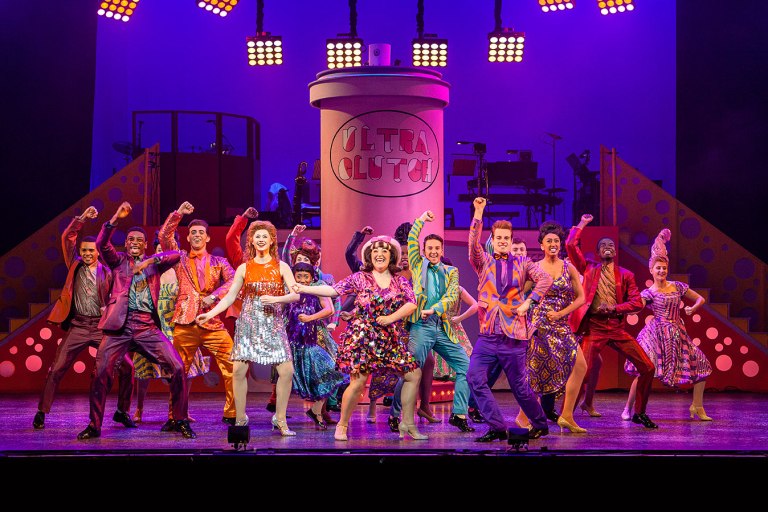 Tony Maudsley digs out the dresses to play homely Baltimore mother Edna Turnblad. Sassy, sharp and hardworking, Edna has the look of those parents at Xfactor Auditions who can’t understand the fuss. Tony is a fun and fabulous actor who seem to know his way round ironing board too!

Edna’s husband Wilbur is played with confidence by Peter Duncan, who I remember from sticking his hand in a dangerous tree in the epic movie Flash Gordon, before throwing himself into Children’s BBC’s Blue Peter. Dressed like a forgotten Doctor Who he throws himself around the stage like he’s 25!

Claire Sweeney is the baddie here as Velma Von Tussle, with her own tv show just featuring clean-cut white Americans. Idolising and controlling her daughter. Claire Sweeney plays her part with passion!

Freya Sutton as Tracey Turnblad is the driving force behind the story and her dreams of fame lead her into trouble at High School leading her to discover more about Black American culture. 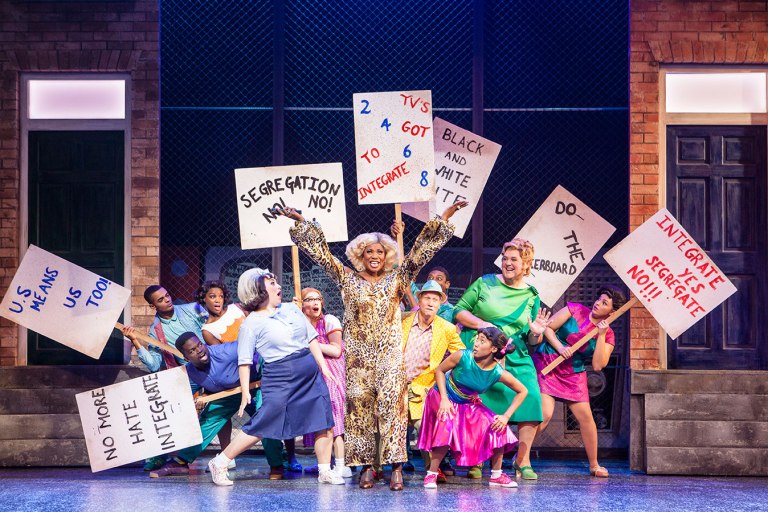 Dressed in glittery gameshow host suits, Jon Tsouras assuredly plays Corny Collins the host of the tv show Tracey aspires to be on.

Belting out a tune comes easily to Brenda Edwards from the X factor. Even if can’t remember what she sang on X factor! I remembered her being a great, great singer and here as Motormouth Maybelle she delivers some standout vocal moments.

Dex Lee plays the strangely named Seaweed, son of Motormouth Maybelle. Dex has some great dance moves and makes them look very easy which I know they are not!

Playing Tracey’s crush Link Larkin is Ashley Gilmore this is a character that is torn between fame and doing what is right. Ashley shows this with big gestures and smoothly conveys his feelings to the audience.

I LOVE this production, the music and the style were just great! The set was sometimes simple and other times huge. The great music helped drive the story forward and made it modern and easy to relate to. The themes of fairness and equality are just as important today as they were in the 1960s!

With such a big cast it could be easy for some to get lost but they all show their own voice and push the story on at a pretty reasonable speed without diluting the message or their characters.

With other big productions in Birmingham over Christmas this stands on its own two feet as a strong story even if it not very seasonal.

If you get chance to see this in Birmingham it’s on until January 2nd 2016 before moving on to over 15 more locations before May 21st 2016.

More about the tour here: hairsprayuktour.com

I was invited to see this as a guest of the New Alexandra Theatre and didn’t pay for tickets or drinks or my really great interval ice cream. My review is an honest reflection of my feelings towards the show! GO AND SEE IT!!