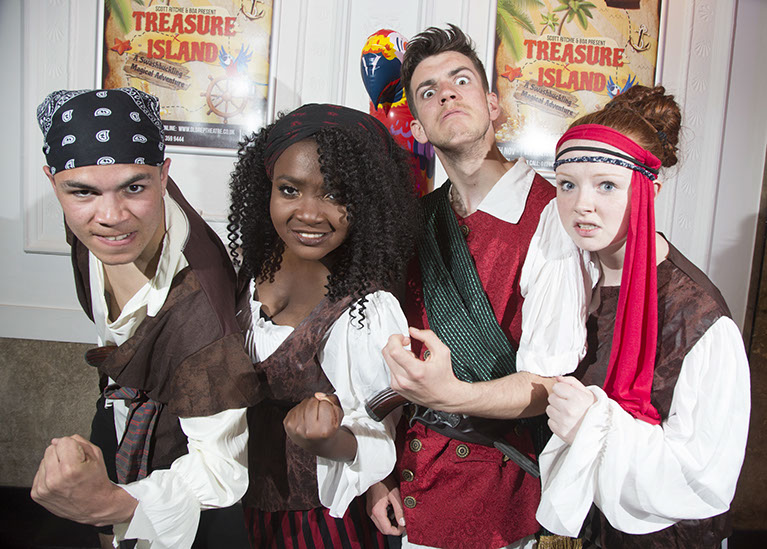 Via Emma for The Old Rep

Get ready to Join the Pirate Crew at The Old Rep this Christmas, as they present their brand new adaptation of Treasure Island. Running from 20 November to 3 January 2016, The Old Rep will be battening down the hatches as the classic tale of Long John Silver and Jim Hawkins commandeers the stage for over six weeks.

Brought to the stage by seasoned director and performer, Scott Ritchie, this first-of-its-kind production has been created exclusively for the audiences of Birmingham and The Old Rep.

Scott has been working all year, with the help of an outstanding production team, to build Treasure Island from the ground, incorporating creatives and local actors as much as possible.

Treasure Island will be brought to life by a cast of professional actor-musicians, who all play an astonishing variety of instruments throughout the show, which features original songs by composer Steve Allan Jones. Ian Crowe will star as Long John Silver, whilst Midlands-born Barry Shannon takes on the role of Doctor Livesey. Treasure Island also features David Heywood, fresh from his role in the UK 25th anniversary tour of Return to the Forbidden Planet, as Ben Gunn. Completing the cast are Dominic Rye as Captain Trelawney and Ella Vize as the Mermaid Princess.

Gianni Cantone, a current year 13 student at Birmingham Ormiston Academy, will take to the stage in the leading role as Jim Hawkins. Given the opportunity to audition through the academy’s partnership with the theatre, the aspiring performer will be starring alongside the professional actors. Also starring in the show is local actress Charlotte Swarbick, a recent alumni from East 15 Acting School, who will be playing Jesse.

Scott Ritchie, director and producer of Treasure Island, said: “I originally intended to cast the BOA students in ensemble roles, but I was so impressed by Gianni and Charlotte that I ended up offering them the lead roles.”

He added: “I’m thrilled to be working with such a talented team of creative professionals, and it’s been great to incorporate local actors in Gianni, Charlotte and Barry Shannon. The show promises to deliver Treasure Island as never seen before, and I can’t wait to bring it to The Old Rep stage.”

Prepare yourself for an extraordinary adventure with Treasure Island, featuring peg-legged pirates, hip hop parrots and mermaid princesses. The Old Rep will be transformed into a pirate haven, complete with original live music. Will the hero Jim Hawkins find the buried treasure in time? Hop on board and join the Pirate Crew – but watch out for Long John Silver!