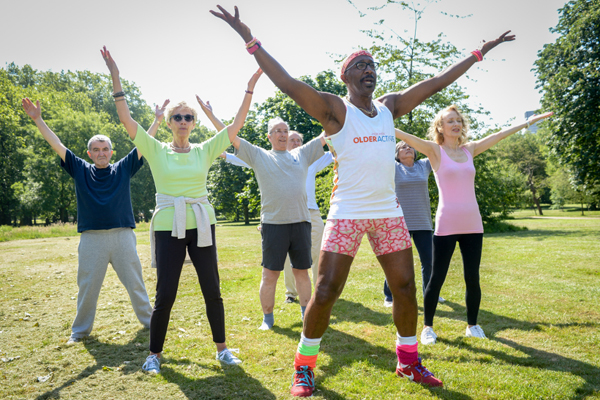 The UK’s Most Active Person over 65

If you are over 65 and still like to keep active, know that age is just a number and you take pride in putting younger people to shame with your fitness routines, then don your training shoes and enter the national search to find the UK’s most active person aged 65 and over.

Launched by well-known celebrity fitness guru Mr Motivator, who at 62 still keeps fit and healthy with regular workouts that used to keep the UK energised every morning in the 90’s, the Older Actives competition, sponsored by Ateronon, is searching for nine* regional winners from around the country, culminating in an overall national winner taking the crown.

Fear not, the winner won’t just be chosen for running nine marathons or being a veteran cyclist who completes 30 miles a day. It can be any form of exercise that wins the competition, whether that’s enjoying swimming, going to weekly Zumba classes or maybe you have a prize kept garden, as long as it keeps you fit and healthy and you enter, you have a chance of winning.

Winners of each regional heat will receive £500 worth of Ateronon products, £100 Marks & Spencer vouchers and a winner’s medal. All regional winners will then be automatically entered into the national final later in the year. The national winner will be crowned as the Older Actives 2015 champion and will receive the above prizes as well as a trophy and £1,000 worth of UK holiday vouchers.

Whilst the over 65’s have been considered as the least active age group, new research shows that they are now the UK’s most frequent gym users**. With a shift over the decades of how older people are perceived, the Older Actives campaign is aimed at promoting well-being and proving that anyone, regardless of age, can remain active.

Mr Motivator, said: “My whole ethos in life is about looking after myself and when I was asked to help launch this campaign, I literally jumped at the chance. Celebrating exercise in older age is something we all need to embrace and the Older Actives campaign will reward those who include fitness in their daily life.

“Anyone can fit exercise into their routine, whether that’s taking the stairs instead of the lift, a walk to the shops or going to the supermarket and lifting cans! You don’t need to spend a fortune to stay fit and healthy and I think this campaign is a great way to inspire people of my generation to get active.”

Chris Meaney, Head of Marketing at Ateronon Active, added “This is a great campaign for us to get behind as it sits perfectly with Ateronon’s brand values of helping people live healthier, more active lifestyles.

“We want to celebrate the achievements of the older generation and hopefully inspire others along the way.”

The launch of the Older Actives Campaign supports a new product called Ateronon Active, a natural supplement aimed at providing relief for those with aches and pains. It can also assist anyone who still exercises and wants to combat the effects of Delayed Onset Muscle Soreness (DOMS).

You can enter the competition via post, online at olderactives.co.uk or call 0845 505 0090 for more information. Postal entries can be sent to  Ateronon, CamNutra Ltd, Bishop Bateman Court, Thompson Lane, Cambridge, CB5 8AQ.

The competition closes on 7th August 2015.

** Research carried out by healthcare provider Nuffield Health. Figures published in 2015 are from July – Dec 2014 from 75 UK clubs.