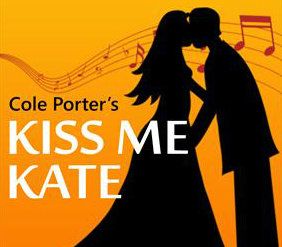 Shall I compare thee to a summers day, when it’s too darn hot in Baltimore? Kiss me Kate is a musical by Cole Porter, about a travelling theatre company’s production of Taming of the Shrew arriving in Baltimore in the late 1940s!

I was really pleased to be invited to this first night which had a packed house at Birmingham’s Crescent Theatre.

How do I love thee? Let me count the ways:

The huge effort shown by Bournville Musical Theatre company is right there on the stage. Founded in 1896 the BMTC turns 120 next year! Which is a pretty amazing achievement and it was designed for “the benefit and enjoyment of the workers at the Cadbury factory in Bournville” My great grandfather worked at Cadbury‘s as did my Grandmother (who worked there until the mid 1980s) and I bet they watched productions by this theatre company over the years.

These are great, from the great sets backstage at the Baltimore theatre, particularly its smoky rooftops, to the unreality of the Italian town of Taming of the Shrew with its pastel coloured paint.

3. The characters and plot:

A famous actress Lilli Vanessi, (wonderfully played by Rhian Clements) returns to a touring company as it arrives in Baltimore. It’s one year since she and her ex-husband divorced, and the feelings are still pretty raw. Lilli’s ex husband is theatre director and actor Fred Graham (John Morrison plays Fred with zest and passion). Fred is also chasing after Lois Lane (gleefully played by Lucy Evans) but Lois is after Bill Calhoun (Dan Jones shows his singing and movement skill in this role).

Lilli Vanessi is playing Katherine (The Kate of the title and the shrew that apparently needed taming) with Lois Lane as Bianca. Once the play within the musical starts, it becomes clear for anyone who has seen the film 10 things I hate about you that Katherine and Bianca hate and love their male suitors with equal passion.

The musical is directed by Ann-Louise McGregor, with musical director Chris Corcoran and choreography by Chloe Turner, I can only begin to imagine how many months it took to put this together. They and their cast, back stage crew and musicians should be very pleased with the results.

I know the song Too Darn Hot pretty well, but didn’t know it was from Kiss me Kate, I didn’t realise it does soo little to advance the plot of the musical. However, its a great set piece for the company while giving lead dancer, Jordan McKenzie an opportunity to shine as Paul.

There’s an element of 1960s/70s Carry On as four male dancers remove the stockings of the “town’s maidens”. The maidens are then carried over to tread the grapes for the wine at the forthcoming wedding!

There’s an irony to living 45 minutes drive from Shakespeare’s Birthplace, in Henley Street, Stratford-Upon-Avon. This Italian/American influenced musical is actually set around 1940s. Events such as World War II and the film Lassie Come Home whilst the play within the musical is set in Venice.

A fun and charming production with an extended company of nearly 40 actors this is well worth seeing! Well done!

You can catch Kiss me Kate at the Crescent until 16th of May. Buy tickets here: crescent-theatre.co.uk/theatre-event.php?EventID=41930

*I’ve not been paid to write this review but I was given two tickets to see the musical. Thanks to Bournville Musical Theatre Company.