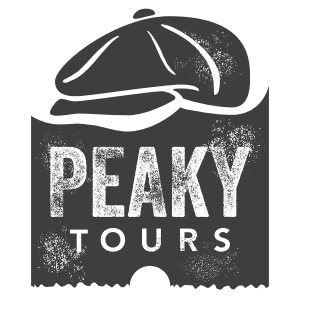 Last week I was invited* to join the first walking tour for Peaky Tours hosted by professional Brummie, Carl Chinn MBE. I’ve met Carl several times during my time looking after the local history sections at Borders bookstore (RIP Borders!) I’ve seen Carl speak on TV, but this was the first time I’d got to hear a live talk, and I was really very impressed.

The Peaky Tour has nothing to do with the TV series or the BBC, but it is infact about the real history that inspired the TV show. We met at the Old Crown which is the oldest pub in Birmingham, and found ourselves taking an evening tour around Digbeth.

It was great to hear about the real Thomas Shelby, Alfie Solomons and Billy Kimber who inspired the tv show. We also found out about the buildings of Digbeth and the types of people who lived there. Historical images of the area and the people were projected onto buildings to make the history come to life!

We ended the walking part of the tour with a handmade late dinner at The Anchor Inn. Traditional faggots, mushy peas and mash potato and a pint of Sadler’s Peaky Blinder beer.

Find out more about a Peaky Tour package at: peakytours.com

*My place on this tour was given to me in exchange for telling you about it. I’ve not been paid to write this article, but I was given a great dinner and a pint of Peaky Blinder beer.